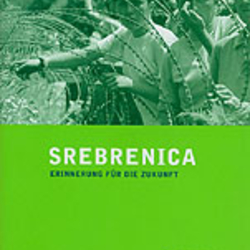 The massacre of Srebrenica stands as the turning point of European appeasement policy toward Serb and Croat extremists. At the same time, the hair-raising brutality of General Mladić and his Chetniks, who murdered between 7,000 and 8,000 men, teenagers and male children before the eyes of the UN and the Dutch peacekeepers, forced many successors of Nazi Germany to revise some certainties they had long held sacred. The notion of “Never Again War,” that the children of the perpetrators of Nazi Germany’s monstrous crimes had made into their fundamental conviction had apparently overlooked one thing: how do we protect the victims, who can be kept safe from these gruesome crimes only with armed force?

The horror of Srebrenica was not the first atrocity to place this issue on the agenda. After the attack by Serb extremists on Vukovar in Croatia; the expulsion and murder of Muslims in Priština; the attacks of the feared Arkan paramilitary troops on eastern Bosnian cities; and seeing on television on a daily basis how the people of Sarajevo were starved out, we should not have averted our eyes from the bitter truth that supplying food was no answer to the question of how to save human life from those who no longer respected any civil laws, human rights, morals or ethics.

The starving people with shaven heads seen behind barbed wire in Omarska exposed the bitter truth: that concentration camps once again existed in Europe at the dawn of a new century. The public was moved by those images; but for many, the path to a decisive position was still a long one.

Initially, the prevailing view was that a strict embargo would be the most effective and careful way to stem the violence. This avoided dealing with some thorny issues; for example, whether a strict embargo, which generally most affects the civilian population—and thus, often the weakest and least participating members of society—could possibly be just. And also the question of how to enforce an embargo if there were forces unwilling to comply with it, as was recognizably the case with Russia, Iraq and Greece.

There was quite a bit of controversy in the leftist-Green-social democratic milieu surrounding the question of how to counter the aggressors. Not even the question of who were the perpetrators and who were the victims was clearly discernible to many; among other reasons, this was apparently an attempt to avoid the hard fact that what was needed was to take the side of the victims, clearly and without reservation.

Egon Bahr, the architect of Ostpolitik , saw no alternative to allowing this conflict in Europe of the outgoing 20 th century to “bleed out.” Peter Glotz attempted to establish the uniqueness of Auschwitz in order to counter the admonishing voices of people like Marek Edelmann who, as a survivor of the Warsaw Ghetto, postulated the moral obligation to intervene.

It was completely impossible to utter the almost unspeakable; namely, that we would have to bomb Chetnik positions in the mountains surrounding Sarajevo in order to liberate those imprisoned in the city. And that we would have to use military force to get the UN supply convoys to the starving population if small armed troops tried to stop the trucks; or that we, if the community of nations shied away from risk to themselves, namely losing their own soldiers, would have to give the Bosnians the right to self-defense, thus providing them with access to weapons.

In more than a few cases, the debate over the question of the proper intervention was influenced by personal suffering experienced during the bombing of German cities. As such, the question posed by Peter Schneider, of why the children of the perpetrators felt that they needed to learn the lesson of non-violence from the aggression of their fathers, became uncomfortably justified: was it not the Poles who were forced to defend themselves with weapons against the German attackers; and was it not Russia that fought back the German Wehrmacht with unthinkable suffering? Should not the tracks leading to Auschwitz have been bombed in order to provide the Hungarian Jews with a small chance of survival? Was not the use of counter-force a legitimate—indeed, a morally necessary—measure to stop injustice?

The unfathomable murder in Srebrenica was not the first occasion to pose all of these questions to us. The questions were already there. But it has taken us a long time to cast a new eye on some political certainties that have accompanied us through many years of post-war Germany.

It was June 30, 1995 when the German Bundestag voted on the participation in an intervention in the war against the Bosnians. That was ten days before the fall of Srebrenica.

I voted in favor of the proposal of the German government under Kohl/Genscher to a military response to murder and expulsion with the feeling that our lessons from history must teach us things other than pacifism. (see also here )