"Putin is aiming at everything", - Marieluise Beck 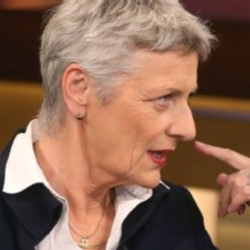 Interview by Katja Tichomirowa with Eastern Europe Expert Marieluise Beck, member of the German Bundestag’s Committee on Foreign Affairs and the Greens’ Spokesperson on Eastern European Affairs. In the steering committee of the Petersburg dialogue, Marieluise Beck advocates for closer cooperation with Russian civil society. Alongside the late CDU politician Andreas Schockenhoff, she was one of the critics of the Petersburg dialogue and is calling for its reform.

No other issue in recent years has been as emotive as the debate about relations with Russia following the annexation of Crimea. Eastern Europe expert Marieluise Beck says a special relationship between Germany and Russia is the wrong approach.

Marieluise Beck, the Greens’ Spokesperson on Eastern European Affairs, reacts to the appeal “Another war in Europe? Not in our name!”, whose signatories include her party colleague Antje Vollmer.

Mrs Beck, why is it necessary to launch a counter-initiative in reaction to the appeal by 60 public figures who are committed to peace?

The list of signatories does indeed include a great many respected public figures and therefore carries considerable political weight. However, it creates the mistaken impression that there will be “peace on our continent” if Germany and Russia reach some kind of bilateral understanding. It ignores Russia’s aggression towards Ukraine. And it disregards the dreadful historical experiences of the countries on their shared periphery, which remember only too clearly that this kind of understanding has, more than once, been forged at their expense.

Where does this selective understanding of history come from?

It is a very deep-seated, very German way of thinking – a blend of Bismarck and Egon Bahr. The notion of a special relationship between Germany and Russia is misleading. It plays into the hands of Putin, who is heading towards the European Union. The Kremlin knows what it’s doing when it supports the European Right, such as Jobbik in Hungary and the Front National in France: these parties don’t want an open Europe either. Putin is aiming at everything, including the EU and the transatlantic alliance. That’s why the Winter of Peace campaign – Friedenswinter – brings together both right and left. Putin is making an offer to both sides.

And what about the European Union? Has it made an offer to Russia?

I think that the offers made by the West after the USSR fell apart were much more wide-ranging and diverse than Russian propaganda would have us believe. They include membership of the IMF, the World Bank, G8, G20 and the WTO, and also the NATO-Russia Council. Russia is not a member of NATO but it has access and is represented at NATO’s headquarters in Brussels. And lastly, the list also includes the Partnership for Modernisation with Russia, for which Germany is a longstanding advocate.

The collapse of the imperium has led to a painful sense of loss, and in Germany we know only too well what kind of dangerous consequences this can have. The question is what kind of lessons should be learned from this. No one is seriously rejecting the option of dialogue with Russia. The key issue is the kind of concessions that are made to compensate for the pain of loss. I am opposed to potential concessions at third countries’ expense.

At Ukraine’s expense, in other words?

We must understand the disquiet that will result if Berlin and Moscow reach some kind of bilateral understanding, and the sense of unease when Gregor Gysi flies from Berlin to Moscow, bypassing Ukraine, in order to “mediate” on this issue. Historical guilt towards the Soviet Union undoubtedly exists.

But since the collapse of the Soviet Union, that applies not only to present-day Russia but to all successor states, and that means the Baltic countries, Belarus and Ukraine, which also paid an immensely heavy toll in blood.

Interestingly, both sides in this debate accuse the other of “forgetting history”.

I wish we could ban accusations from this debate. The politicians who masterminded the détente policies in the past are influenced by their experience with the Soviet Union and therefore have a different view of today’s Russia. Internally, the Soviet empire was held together by repression, but externally, it was reliable and complied with the treaties. The Helsinki Final Act bears Brezhnev’s signature. The dramatic aspect of Putin’s policies, by contrast, is the total loss of trust. Putin has violated the Budapest Memorandum and the Minsk agreements, which were reached under the auspices of the OSCE – an institution to which Russia itself belongs. This is a fundamental breach of trust.

Even so, your critics are still seeking dialogue with Russia.

Why do the 60 signatories assume that there is no dialogue with Russia? In fact, the opposite is true: in recent months, the Chancellor has called President Vladimir Putin more often than any other head of state, and there are more frequent conferences with Sergey Lavrov than with any other foreign minister. The Russian President has spoken on German TV. The EU and the OSCE are working intensively on a diplomatic solution. There is a 100 per cent consensus within NATO and the European Union that there should be no recourse to the military option. By contrast, Putin has not only stated that he is willing to deploy the military: he is actually doing so.

Are Russian fears completely irrational, then?

The Russian leadership’s fears are very real. However, they are triggered not by supposed aggression by NATO but by the expansion of the democracy movements in the neighbourhood and in Russia itself. The Orange Revolution was a bellwether. In the East of our continent, Europe has become a synonym for the rule of law, democracy and an open society.

Does that apply to Russia as well?

There is a strange but frequent phenomenon in this debate: an almost colonialistic view of Russia which argues that Russians need authoritarianism because they are incapable of democracy. My Russian friends react very sensitively to that. And after all, the same could have been said of Germany in 1945 and yet we too have become capable of democracy.