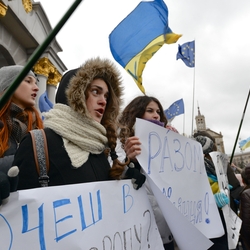 hbs: You have visited Ukraine several times since the outbreak of the crisis last fall. After returning from your most recent trip in September, you reported that a lot of Ukrainians felt let down by Europe in this conflict. What actions would Ukrainians have wished for from the EU?

Marieluise Beck: Nobody who took part in the Maidan demonstrations had enough fantasy to imagine what would lie ahead of them: that this revolution against their corrupt regime would end in a war of Russia against Ukraine. The realization came in several stages: First, the dynamics of the Maidan forced Yanukovic to leave. For a moment there was a sense that the doors for democracy, for the rule of law and for the way towards Europe were wide open. Then Crimea was taken over and annexed by Russia and Ukraine started to understand that Russia was willing to use military force against them. The West answered with sanctions, but already then you could see the hesitation: Shall we really do it? How strong should the sanctions be? Will they start harming our own economies? The annexation of Crimea was followed by wordy statements, but no strong and decisive action was taken. And that started disappointing the people in Ukraine. The next stage was marked by Russia’s military action in Eastern Ukraine and the Donbas. By now the disappointment is huge, people feel betrayed. They tell us that they have been fighting for freedom and for what we call “Western values” and now they are left alone. There is a blatantly obvious aggression by Russia and still the European Union and its member states do not really want to act. This has caused huge disappointment and a feeling of betrayal in Ukraine.

The sanctions regime enacted by the EU against Russia has been subject to considerable debate within Europe. How do you assess the impact of the sanctions so far?

The sanctions definitely have an impact on the Russian economy. Foreign investments have been going down; the Russian Ruble is under pressure. Many Russians- and the oligarchs themselves- take their money out of the country because they don’t feel confident anymore in the future of their economy. But we know that sanctions only have an effect in the long-term and the problem is that the aggression needs a short-term answer. So yes, they do have an impact and they are being felt in Russia, but unfortunately they do not seem to be the answer that Ukraine now needs so urgently.

EU sanctions toward Russia are designed to influence the decision-making of the power elite in the Kremlin. However, as a result of the sanctions, the Russian economy overall has taken a hit. In how far do the sanctions affect the Russian population more generally rather than merely the political and economic elite?

Well, the first step was to put some individual people on a black list, to ban those responsible for the militarily intervention and annexation of Crimea. The aim was not to harm the Russian people in general who have to live under a regime they often didn’t choose themselves. But the problem is that if sanctions really are to be decisive and meaningful, you almost cannot avoid hitting the population more generally, which to a certain extent is unjust. The effects which people feel and have to live with most now though are caused by counter-sanctions which Putin himself put upon the people by banning the import of agricultural goods from Poland and other countries. So what you see now especially in Russian cities is a lack of milk products, a lack of meat and increased prices of these products. Of course people feel this. This is always the problem with sanctions. We saw this in Iraq, for example, when sanctions were used by a dictator as an excuse for his own miss management. Look at the miss management and the weak economy that Russia is suffering from because Putin did not manage to develop and to modernize the economy-- now he can say: well it’s not because you have a bad government, it’s because of sanctions from the nasty West. That is always a problem. But what instruments do you have when you don’t want to intervene militarily but you don’t just want to sit still either? In this case, sanctions like the ones in place now against Russia are necessary.

Media reports have stated that the ceasefire in Eastern Ukraine is unstable. How should the reaction by Germany and the EU look like if Putin continues his current course of action?

We, Germany, the EU and also the United States should be very firm and show that they stand together and that there will definitely be a next round of sanctions if Putin goes on with his aggression. Unfortunately, the divisions within the EU are obvious. Even the last round of sanctions was hard to push through. Chancellor Merkel had to use all her authority in order to reach a consensus between the member states. So unfortunately we now face a situation in which the Kremlin knows that even if they continue -- and obviously Putin intents to do so as the fighting goes on-- they don’t have to fear a painful response. And again, this is a very depressive situation because actually it signals that if he wants to have more of Ukraine, he can go ahead.

In a panel discussion at Georgetown University in early September, Member of Parliament Peer Steinbrück (SPD) said that Ukraine should not become a member neither of the EU nor of NATO in the foreseeable future. Considering the need for a cooperative relationship with Russia to address other grooming international conflicts, the price for such a decision would simply be too high, according to Steinbrück. What is your reaction to this dilemma?

I think that this really is a question of ethical standards. The EU has been working on the EU Association Agreement for years. And now, when Russia is claiming that Ukraine does not have the sovereignty to decide, there are people who say: “well, too bad, but we have to back off because we need Russia in other questions”. This means denying the values which we claim define ourselves to such an extent that we risk eroding our own value system and that of the European Union, which is based on the peaceful cooperation of states. I think we have adopted a responsibility for Ukraine and we definitely cannot back off now. The people of Ukraine are really fighting for freedom and for having the chance to be a member of the EU and of the West. We have to give them a perspective for the chance to enter the EU. And even NATO membership should be an option now that they experience that Russia is ready to act militarily against them and that they need protection. Currently, they simply don’t know where they could get it from. I think we should not give in. Ukraine is a sovereign country and they have the right to decide for themselves whom they want to be associated with.

Some German politicians, especially from the left, argue that rather than relying on NATO and the EU to play a constructive role in Ukraine, more effort should be made to revitalize the OSCE. How do you see the role of these three institutions in the attempt to avoid further escalation?

The OSCE has been a wonderful instrument to push for democratic developments in countries where the people and governments themselves had decided that they wanted to head towards democracy and rule of law. But the OSCE is not really strong enough to handle aggressive, open and military conflicts like the one we witness in Ukraine at the moment. Right now it is supposed to control that the border is not going to be crossed anymore with heavy military equipment from the Russian side. They are supposed to check that all sides respect the corridors and buffer zones. But when you see that there was supposed to be a ceasefire and under the eyes of the OSCE the fighting just goes on, you realize that the authority of the OSCE and the means they have really are not decisive enough to calm down and to handle this conflict. That’s why you have to come back to stronger institutions like NATO and the EU. But NATO says clearly that since Ukraine is not their member state and does not have MAP, it’s not their business and the EU does not really have a common foreign and military policy.So this is the dilemma Ukrainian people are paying for now.

Despite Foreign Minister Steinmeier’s shuttle diplomacy over the past months, Germany has often been criticized for not acting decisively enough vis-à-vis the Kremlin. How do you explain Germany’s hesitant approach toward Putin to the Ukrainian you meet?

It’s difficult having to explain to Ukrainians who have faced such terrible pressure and have to live with military aggression from inside and outside that Germany’s society and its elites are split over the question of how to deal with Russia. When the new government came into office in the fall of 2013, social democratic Foreign Minister Steinmeier was deeply convinced that it was time to vitalize the modernization partnership with Russia. Shortly afterwards, the Euromaidan movement erupted and the situation started to deteriorate over the following months. While the Foreign Ministry and the vast majority of the German public now understand that Putin can no longer be a partner, there is still a deep wish to live in close and good partnership with Russia and to return to “business as usual” or even friendship like in former times. There is still a strong tendency to rather not face reality in order to go back to the status quo ante.

You just spent several days in Washington D.C. in meetings and conferences on transatlantic strategies toward Ukraine. In your assessment, is the transatlantic partnership faring well during the current crisis?

Yes, you hear very often here in Washington D.C. how grateful the Americans are to Angela Merkel for pushing the EU to closely coordinate its decisions on sanction against Russia with the US. Of course the White House and the State Department know that it wasn’t easy to get all the European countries to go along with imposing and stepping up sanctions and that Chancellor Merkel played a central role in accomplishing that task. At the same time, you learn pretty quickly over here that the Americans see Ukraine first and foremost as a European problem, along the lines of “don’t come to ask us to manage this crises—please do it yourself”. This definitely reduces the expectations that the EU and Ukraine should have when it comes to Washington’s willingness to play a leadership role in this conflict.