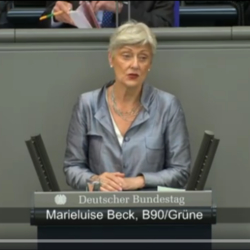 On July 22, 2016, the German Bundestag commemorated in an agreed debate the 75th anniversary of the invasion of the Wehrmacht of the Soviet Union. Marieluise Beck spoke on behalf of the parliamentary group Alliance 90 / The Greens. Check against delivery.

The Wehrmacht’s invasion of the Soviet Union was not an invasion of Russia alone. The 27 million Soviet war victims came from all parts of the Soviet multi-ethnic state – from the steppes of Central Asia to Siberia. All of these places sent their men and women to defend the Soviet Union against the German war of annihilation. Many never returned. We owe them our respect.

And the Second World War did not begin with the Eastern Campaign. The treacherous invasion of the Soviet Union was preceded by a shameful secret pact, signed by Molotov and Ribbentrop on 23 August 1939 in Moscow. This pact was followed on 1 September 1939 by the German attack on Poland, which marks the beginning of the Second World War. On 17 September 1939, the Red Army marched into Poland from the East. The two totalitarian regimes established a reign of terror in both parts of occupied Poland, which claimed hundreds of thousands of victims. The treaty was far more than merely a pact of non-aggression. In it, the two powers agreed to carve up Central and Eastern Europe as well as securing the supply of important raw materials which the German Reich needed to wage war.

Stalin had underestimated the possibility that Hitler would breach their pact. He was largely unprepared for the attack in the summer of 1941. The Wehrmacht swept through the Soviet-occupied part of Poland, into Ukraine, to Belarus, the Baltic states and through Russia, to the gates of Moscow, leaving in its wake a trail of unimaginable destruction and killing of civilians.

It was during this firestorm through Eastern Europe that the annihilation of European Jewry took place. For us, Auschwitz is the symbol of this annihilation. Historian Timothy Snyder points out that the far greater number of victims were killed in mass shootings during the German attack. Far more members of the SS and Wehrmacht were involved in the annihilation of the Jewish population in the East than was assumed for many years.

These war atrocities were also shown in the Wehrmacht exhibition of 1995. The furious reactions to the exhibition showed how painful confronting the crimes of the Wehrmacht was, and still is, for German society.

Well over five million Red Army soldiers became prisoners of war. They were deprived of their dignity, since, like the entire Slavic population, they were regarded as Untermenschen – ‘subhumans’. They were denied the protective status of prisoners of war under the Geneva Convention. Living and working conditions in the ‘Russian camps’ were comparable to those in the concentration camps. Sixty per cent of Soviet prisoners of war died during their imprisonment. Today, less than 4000 of them remain alive. The Bundestag last year granted survivors a sum of 2500 euros in recognition of their suffering, yet the terrible injustice committed against the Soviet prisoners of war must also finally be recognised as a Nazi crime. Even today, Germany has no appropriate place of remembrance for Soviet victims of the war.

This racial war was merciless in its treatment of the Slavic population. In Belarus, the war claimed the life of one in four civilians. The Ukraine became the main territory from which the German Reich recruited forced labourers. In the summer of 1942, a compulsory two-year period of service in the German Reich was introduced for Ukrainian women and men aged between 18 and 20 years. Up to 2.5 million Ukrainian forced labourers were transported to Germany. On their return to the Soviet Union, the forced labourers were stigmatised, their fate seen as taboo and it was many years before they were recognised as victims. Like many returning prisoners of war, around 500,000 forced labourers from Ukraine were sent to the gulags, accused of being ‘collaborators’.

Leaving people to starve to death was a deliberate strategy used in Germany’s warfare against the Soviet Union. Around 4.2 million Soviet citizens died an agonising death by starvation – over a million of them during the siege of Leningrad. Germany’s military leaders considered Ukraine, known as a ‘breadbasket’, to be of strategic importance. Ukraine was forced to hand over food supplies, without which the war of aggression would not have been possible. Huge numbers of people in Ukraine were thus left to starve. All of this was not merely tacitly accepted – it was an integral part of planning.

During the German attack, several ethnic groups in the Soviet Union were deported on orders from Stalin. Hundreds of thousands of them perished during the transports, starved or died of thirst, having been left to fend for themselves in the Kazakh steppe or in Siberia. Many of them were unable to return until after Stalin’s death – indeed, for the Crimean tartars, return was not possible until 1989.

The Soviet Union no longer exists and Russia is not the sole successor to this empire. The historical guilt incurred by the German Reich, together with the responsibility this implies, therefore does not only apply with regard to Russia. It must also apply with regard to the people of Armenia, Azerbaijan, Belarus, Estonia, Georgia, Kazakhstan, Kyrgyzstan, Latvia, Lithuania, Moldova, Russia, Tajikistan, Turkmenistan, Uzbekistan and Ukraine. This too, is something we should remember today.