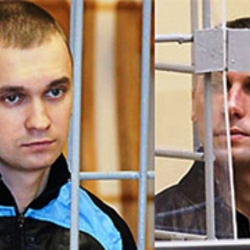 The death sentences imposed on Uladzislau Kavalyou and Dzmitry Kanavalau in Belarus once more reveal the full heinousness of the death penalty. The most serious doubts have been raised about the two convicted men’s guilt.

Uladzislau Kavalyou and Dzmitry Kanavalau are being held responsible for a brutal bomb attack on a metro station in Minsk on 11 April 2011 in which 15 people died and hundreds were injured. The principles of the rule of law were trampled underfoot in the course of their trial: Witnesses for the defence were silenced or not admitted. Evidence was blatantly manipulated. One of the victims of the attack stated in no uncertain terms that he had not seen the two young men at the scene of the crime, despite claims to the contrary by the public prosecutor. It is obvious that the convicted men’s confessions were obtained by torture.

Uladzislau Kavalyou found the courage to give an account, during the trial, of the torture to which he had been subjected and to revoke the confession extorted from him. Despite all these contradictions, it is to be feared that the two young men will be sacrificed merely so that the regime can retain its hold on power. It appears that by imposing these death sentences the authoritarian regime is seeking to prove that it is in a position to quickly establish the truth and security.

We strongly urge the Government of Belarus to declare an immediate moratorium on the death penalty. It would be the last country in Europe to do so. In the long term, this inhumane and irrevocable form of punishment must be abolished entirely. Uladzislau Kavalyou and Dzmitry Kanavalau must not be executed. A retrial must be conducted.