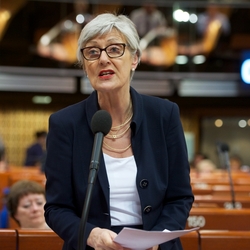 this morning you could read in Izvestia that a group of Duma representatives are preparing a law suit against Mikhail Gorbachev. They are going to sue him for letting different countries have sovereignty – that is, for letting the Soviet Union fall apart. I am very worried by the signal that sends. It could be background music for what we are seeing at the moment – it may be that the idea is to reinstate as much of the Soviet Union as possible.

I say that with deep concern. Coming from Germany I know what it means when there is a questioning of the sovereignty of other countries and when there are requests to change borders. In Germany we are grateful to Mr Gorbachev and to the Russian people because they let us reunite. Many Germans remember that their families, their men and their soldiers were well treated by Russian families and there is great friendship between us. We are therefore really sad about developments that have come about not because of an issue between the Russian people and our people but because of those people currently sitting in the Kremlin.

One member of the Assembly, from the Jobbik movement, is wearing a T-shirt that says that Crimea belongs legally to Russia and that Transcarpathia belongs to Hungary. That shows the crucial issue. If we abandon the principle of the integrity of borders and replace it with thinking on ethnic lines, peace in Europe will come to an end. We have preserved that peace for more than 60 years and we must be very thankful for it.

I would say to our Russian colleagues – they are not in the Chamber – that there is also danger for Russia. After all, if Russia is going to demand that kind of sovereignty, what about Chechnya? We all remember the brutal war fought there to quash that idea. What of the claim of part of Moldova that it wants to belong to Romania? Transnistria has already been taken away from Moldova – not formally, but in practice that is the case. What about other parts of Europe, in the south and the west?

Our peace is based on the principle of integrity of borders. We need to send a strong signal about that.