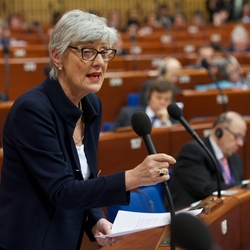 I have often been on Maidan, where the protest started as a student movement with students saying that they wanted to go with Europe because they saw their futures there. When police started badly beating those students, their parents came and said, “They are now beating our children. That is too much.” It then started to become a people’s revolt against despotism, omnipresent corruption, a politically controlled justice system and the shameless personal gain of the political elites. It was an uprising of all citizens. On Maidan, the people spoke not only Ukrainian; Russian, and Jewish citizens, among other minorities, were also present. There were smaller Maidan equivalents in 50 Ukrainian cities, including in the east, which proves that the country is not divided.

Ukraine is a sovereign state that now has a legitimate government. It is not Russia’s backyard and neither is it the backyard of the EU. Whoever thinks along those lines is falling back into the imperial mentality of the 19th century, but we live in the 21st century. There cannot be two classes of sovereign state in Europe.

Peace in Europe must be based not on the military force of the most powerful states but on the rule of international law. Russia guaranteed the integrity of Ukraine’s borders in the Budapest memorandum, but broke its promise when it annexed Crimea. Thus, it challenged the order of peace in Europe. When we talk about Ukraine, we are talking about ourselves. The Council of Europe stands for the survival of international law; it is responsible for peace on our continent.

I am worried that the eastern part of Ukraine is systematically being destabilised. That destabilisation was instigated partly by provocations from across the border, perhaps with the intention of preventing the elections on 25 May. Those elections are crucial. Ukraine needs stability through legitimate elections and a pluralistic constitution. The Council of Europe must support that political process with all our might. We owe it to the idea of Europe and its citizens.