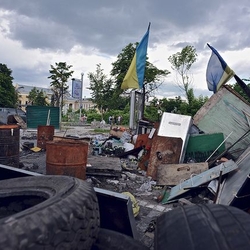 While Russia’s recent military involvement in the Syrian war theatre has caught much of the West by surprise, the ongoing conflict in Eastern Ukraine has increasingly slipped off the public’s radar. We spoke with Marieluise Beck, Member of the German Bundestag and spokesperson for Eastern Europe of the Green Parliamentary Group, about the daunting reform challenges in Ukraine, the prospects for the implementation of the Minsk agreement, and German public sentiments towards Russia.

hbs: You visited the southern Ukrainian city of Odessa in early September. How would you describe the public mood you encountered?

Well, I would say it’s a mixed picture. Odessa used to be a popular destination for tourists and its local economy depends on tourism for a large part. But when I visited a year ago, the city was totally empty. Nearly no tourists were present at all and the public mood was very depressed. This year I fortunately witnessed a totally different scene: every restaurant was full of tourists, because many of those who used to go to Crimea now choose to go to Odessa instead. So this was good news.

The second good news is that appointing Mister Saakashvili as Governor gave many people a lot of hope. He has promised to fight corruption in two spheres crucial for ordinary people: police and customs. To be honest, I don’t know whether he really has a chance to succeed. I learned that part of the city is owned and paid by an oligarch based in London. Supposedly, he owns half of the harbor and the people on his payroll build an influential network in the city that opposes Saakashvili’s plan to fight corruption. If Saakashvili fails, people will get the feeling that it was all in vain, especially if their every-day life does not change at all or even gets worse because they have to start paying gas and oil bills, which they didn’t do before. So in my opinion the outcome of this process is still undecided.

hbs: The fighting in eastern Ukraine has caused roughly 2 million  Ukrainians to flee their homes. How does the country cope with this challenge?

Nobody really knows the exact figures, but to my knowledge 300,000 to 500,000 people fled to Russia and 1.5 million citizens are now internally displaced within Ukraine. There is almost no official support for them because the government is almost broke. Many people have so far fortunately managed to stay with their relatives. The rest, however, is in a very miserable situation as they are faced with only bad options: On the one hand it’s cheaper to move to the countryside, but on the other hand there are no jobs there. To find a job you have to go to the big cities. The flip side of course is that rents and living costs are very expensive in the cities.

hbs: Ukraine is in dire need of economic and political reforms. In which areas could the U.S. and the EU do more to support the reform processes initiated by President Poroshenko?

At the moment, one of the most important steps to take is a so-called “haircut” for Ukraine’s debt. It’s important to note that this debt wasn’t piled up by the current government. It’s the heritage of the Janukovitch era. Ukraine owns 3 billion USD to Russia. At the moment Russia doesn’t want to agree to a haircut, and thereby blocks the conclusion of negotiations with the International Monetary Fund for further financial assistance to Ukraine. We urgently need to find a solution for this.

Ukraine’s biggest domestic problem at the moment is building institutions, for example a functioning tax system which makes people actually pay taxes according to their possibilities. The fight against corruption and the build-up of a functioning and independent tax and judicial system need to be pursued in parallel tracks. In a state that has been living off corruption on all levels for 25 years with oligarchs running the country, this is something that will take a long time and will be very difficult to achieve. The war makes the reform process even more difficult, because some of the oligarchs actually profit from the status quo. It also keeps away foreign investments urgently needed for economic recovery.

The EU has to help with institution building as well as with enabling reverse energy flows, which further decrease Ukraine’s dependency on Russian gas. This dependence was at one hundred percent a year ago but has been reduced quite substantially at an amazingly pace. As for the United States- I think it should continue its assistance in building up an army which functions according to modern, civilized and democratic rules. This is an important piece of a meaningful deterrent against the Kremlin, whose actions stirred the violence in the first place.

hbs: On September 1, yet another ceasefire agreement went into effect in eastern Ukraine. What were the main reasons for the collapse of previous ceasefires and is this new agreement really any different?

Unfortunately, you never know whether or for how long this ceasefire is going to last. Regardless, it is good that the ceasefire was achieved. The problem is that during the first ceasefire, the Russia-backed rebels used their chance to push forward and capture territory the size of about Hamburg. Of course, this creates mistrust and a situation in which the Ukrainian army decides not to withdraw. Additionally, it poses a political risk for Poroshenko: if he misjudges the second ceasefire like he did with the first one, this could mean his political end. We now have a chance for a step by step process: if the ceasefire holds and if the agreed upon step by step withdrawal of weapons takes place, this might lead to a situation in which at least people don’t get killed anymore.

hbs: Given the setbacks in implementing the Minsk Agreement, is there a need for a more holistic diplomatic approach beyond the Normandy format to include Ukraine's neighbors?

This brings you to the very fundamental question of whether the Normandy format was a good idea in the first place. Personally I think it would have been much better to keep Poland in the negotiations next to Germany and France, but this is how it turned out. Like I said, we have to hope for a step by step process, which demands a lot of patience. The Crimea issue has so far been totally excluded from the negotiation process and it seems like the Donbass region will be run by non-democratic forces for quite some time. I honestly doubt that Putin is going to hand over control over the border between Ukraine and Russia, which is supposedly the last step in the implementation of Minsk. I fear that the West is so eager to come back to good terms with the Kremlin and to get rid of the sanctions that it will judge the outcome of Minsk more positively than it really is. Already now Poroshenko is under immense pressure to give in to compromises that actually go beyond what he agreed to in Minsk.

hbs: The U.S. administration seems to currently promote a strategy of de-escalation to improve its relations with Russia. Critics accuse them of “sacrificing” Ukraine in the process. Have you encountered this accusation on your trip to Ukraine?

Yes, I met Ukrainian diplomats and politicians who are very frustrated with the enormous pressure on Ukraine to accept far-reaching compromises. One example concerns the negotiation commission dealing with the local elections. It is being led by France and aside from that only includes the so called “separatists” and the Russians, with France pushing hard to achieve an outcome. That leads to Ukraine practically being in the minority position in this commission. And I talked to diplomats who fear that the outcome of the West’s approach will be a frozen conflict with a mixture of Russian forces and people who are on Russia’s payroll or linked to them controlling part of Ukraine.

hbs: The German term “Putin-Versteher” (Putin whisperer) has found its way into the American dictionary since last year. Is the German public still largely reluctant to see Putin’s authoritarian regime and its actions in Ukraine for what they are?

I think the majority of Germans see that Putin’s actions are unjust. But there is still a strong wish to go back to good terms with Russia. That wish is more powerful than the one to stand side by side with Ukrainians. It seems to me that all bad news from Ukraine- like oligarchs still being powerful or ongoing corruption- are used as an excuse to say that supporting Ukraine is not really worth it since the country is not making any progress towards democracy and the rule of law.

This is still a pretty prevalent narrative based on a mixture of reasons: one is historical guilt felt towards Russia- which of course was the Soviet Union during the Second World War. We tend to forget that Ukraine was part of the Soviet Union as well, which suffered from this terrible war waged by Nazi Germany- the “Vernichtungskrieg”. There is also a widespread fear based on the historical memory of the suffering inflicted on German soldiers by the two World Wars fought against Russia. This fear translates into the fact that most Germans want to avoid any military conflict with Russia at all costs. Of course this is very understandable.

And sometimes I think that maybe we haven't been digging in our history deep enough yet: which impact did the 2 million Ukrainians have on our national consciousness, who were brought to Germany for forced labor and who came from rural areas and were not very well-educated? And what is the role of the many, many fathers or grandfathers serving in the Wehrmacht who were told that Ukrainians are Slavish and therefore “Untermenschen”? Once in a while I ask myself whether we have really looked at this part of our history closely enough. Maybe doing so would help us to revisit our view on Ukraine and Ukrainians.

The interview was conducted by Anna Fuchs, intern at hbs North America, on October 1, 2015.